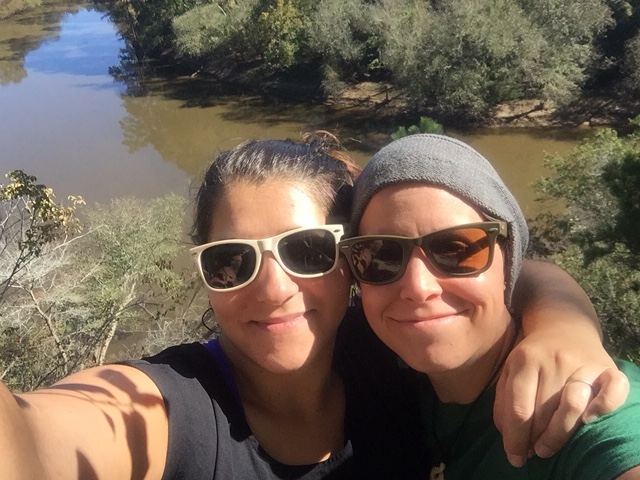 Team Jetlagged is the dynamic duo of Broche and Courtney (names are listed alphabetically, FYI); two cool girls doing life together. This is the blog of their adventures.

Broche is an Anthropologist, bookseller, and writer, who loves doing marketing & communications work because it’s basically another form of storytelling. She grew up traveling the world with her Anthropologist parents, immigrated to New Zealand as a grown up, and moved back to the States when she fell in love. She can often be found kayaking with a book.

Courtney is a rock climber and Ph.D. student working at the intersection of public health and public green spaces. She works to connect community health centers with public recreation and food programs to prioritize using low-cost exercise, nutrition counseling, and disease management rather than pharmaceutical means in order to help low-income populations manage diabetes, hypertension, and depression. She can often be found on a stand up paddle board with a book.

They are the proud mothers of two Australian cattle dogs: a Blue Heeler named Cricket and a Red Heeler named Roo.

About the name: In 2015, Courtney was diagnosed as a Type 1 diabetic after a trip to Australia. She was leading a month-long study abroad course there that included daily hikes, snorkeling, camping, and other exciting activities. When she felt really thirsty and tired a lot, she assumed it was because she was wrangling 27 students in a hot, dry climate doing outdoor adventure things. When she got back to the States and felt only worse, she chalked it up to that jet lag thing she’d heard so much about. Turns out, it wasn’t jet lag. With their goal to travel the world together, Team Jetlagged was the perfect inside joke-turned-awesome couple name.